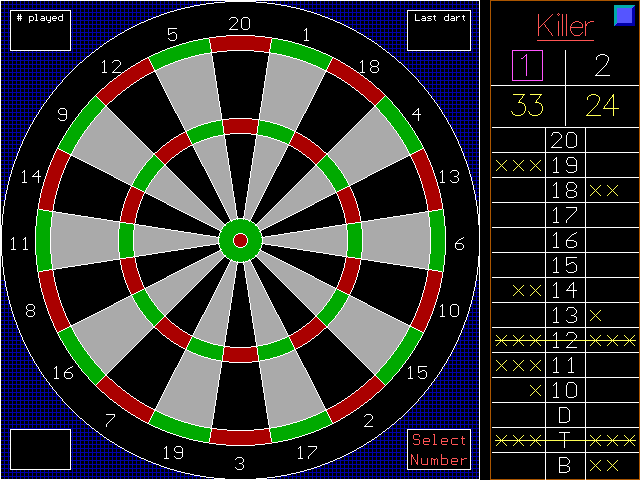 R.S.A Darts is a shareware darts game from South Africa for one to four players. The game is entirely mouse controlled. As with many other darts games the mouse cursor is used to aim the dart but the cursor oscillates and jiggles about so that aiming is not precise and the player must time their shot carefully. The computer can take the role of one of the players and there is an option to adjust the computer's skill to keep the game interesting. There is no in-game help facility but the games are explained in the accompanying documentation. In addition to the usual 301 & 501 games R.S.A Darts also features: Killer — a game in which only the numbers ten and over, doubles, trebles and the bull count. The player must hit the number three times before being able to score on it. When the opponent has also hit the same number three times it is out of play and scores for nether player. This game is also known as Mickey Mouse or Cricket. N.J.M. — a South African game in which each player selects a number by throwing a dart at the board left handed. They then score up to four points for themselves by hitting their own number and take points from their opponent by hitting that number. The objective is to knock their opponent out by reducing their point total to below zero. This game is also known as Russian Killer. Records — this is a single player game which records either the highest score with 3 darts, the highest score with 6 darts, the fewest number of darts needed to hit all the numbers from 1 - 20, and the least number of darts needed to throw ten bull's-eyes.