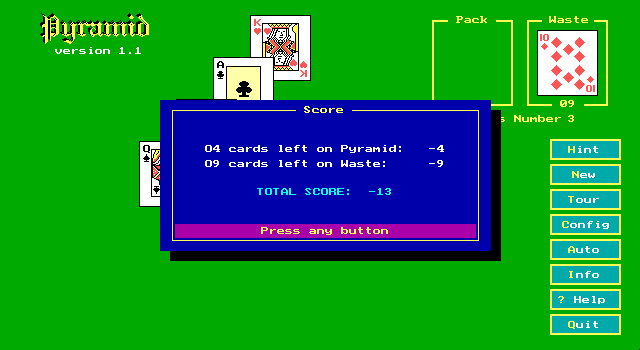 Pyramid is an implementation of the classic card game 'Pyramid Solitaire'. The standard game is a single-player game, but the tour mode can be played against the computer, another player, or as a series of single games. The player is presented with a pyramid of twenty-eight cards. There is also a draw pile and a discard pile. Cards may be removed from the pyramid and/or the draw and waste piles two at a time if they are completely uncovered and their face values total thirteen. A King counts as thirteen and can be removed by itself, a queen counts as twelve and can be removed if paired with an ace, a jack pairs with a two, a ten with a three and so on. If no cards can be discarded, the top card of the discard pile can be replaced with a fresh card from the draw pile. The object is to discard all of the cards in the pyramid, the pack and the waste piles. The game can be played in two modes, a single match mode or a tour mode. There is no high score table and no save game function, but the game does play a pretty tune if the player achieves a positive score.