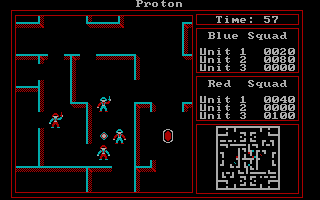 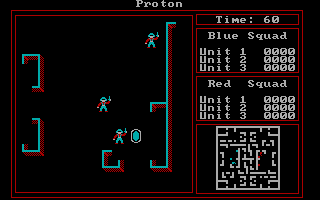 Proton is a single-player computer adaptation of Photon, a.k.a. Lazer Tag's lesser-known competitor. A pair of three-man teams - Blue Squad and Red Squad - duke it out in a maze-like arena, each team with its own base. The player controls a single member of Blue Squad, while the computer controls the other two (and the entire Red Squad). Each team attempts to outscore the other within the time limit. You gain points by blasting the opposing team, and lose them if you get shot yourself (or worse, shoot your own teammates); this also disables your gun for a few seconds. After five successful shots at your opponents, you'll have to "recharge" by shooting the enemy base. When the time is up, the team with the higher cumulative score gets the match.