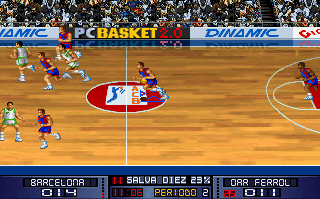 PC Basket 2.0 is the sequel to PC Basket. This is a managerial game that allows you to take part in the Spanish basketball league as any of the 16 teams that were struggling for the title in the 1993/94 season. You can choose the quintet and also the team tactics, as well as controlling the players (something that was not possible in the first PC Basket). You will dispose of two action buttons during the game: in attack, you can either shot or pass the ball, while in defense, you can also try to steal the ball or block your rivals shot. Another important aspect of the game is its database, including players stats of the ACB league since its beginnings, as well as 93/94 clubs information (budget, stadium...).