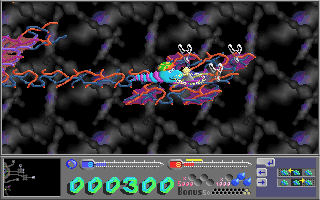 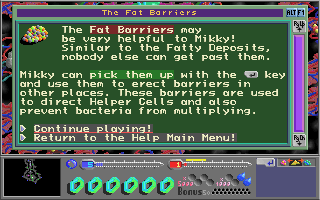 PC-Bakterien! is set in the microcosm. A vicious attack of mean bacteria and viruses endangers the organism. You take the role of Mikky, the worm-like chief defense microbe, and have to defend the organism against the microscopic meanies. Mikky won't be able to do this task alone, but he gets the help of allied cells, namely the hurrying helper cells and the hungry but sluggish feeder cells. Together, Mikky and his allies have to eliminate the multiplying foes to save the organism. PC-Bakterien! is an isometric puzzle game against time. In every level, the basic objective is to clear the organism of all bacteria and viruses. As the enemies constantly multiply when they have the space to do so, this goal has to be achieved before there are too many foes around. Mikky is the only character you directly control. You have to instruct the helper cells to mark the enemies by moving Mikky to your allies, then the feeder cells are able to eat the critters. However, your friends are not the smartest and you have to help them finding their targets. When the enemies are not close to them, the allied cells just aimlessly move around. Mikky himself can act as an obstacle to help the cells finding the way, but is more effective to make use of the items the chief microbe can pick up. Place barriers and arrows to guide the cells to the bacteria and viruses, certain less common items such as a whistle might also help you. The first enemies are immobile and do nothing but multiplying, but later you also encounter moving bacteria, enemies that can only be defeated under certain conditions, and even predators that destroy the helper cells. You might also not find any helper cells in a level and have to create them yourself first. Various puzzle elements are introduced throughout the game, such as enzymes to open new ways by creating tissue, nerves that trigger certain pulses, multiple layers, or alcohol bacteria you have to lure away with beer... You are able to choose between three difficulty levels, with the easiest one being a training level without multiplying enemies. For every level, your high score will be saved. You are awarded points for various things, such as instructing helper cells, collecting certain items, or when foes are eliminated. You also get bonus points at the end of a level depending on how fast you were and on the difficulty level.