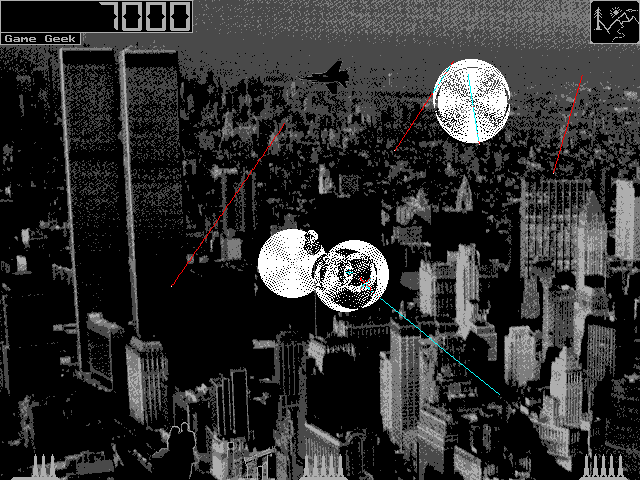 Patriot Command is a shareware game for one or more players, it is one of many games based on the classic arcade game Missile Command. The player has a number of cities along the bottom of the screen together with two missile sites. They are faced with successive waves of incoming warheads which they must destroy to protect their cities. They achieve this by targeting their limited supply missiles so that they detonate close enough to the incoming warheads so that the blast radius will encompass and destroy them. In addition to standard warheads the player also faces stealth warheads that are both harder to see and harder to destroy together enemy aircraft that fly across the screen at high altitude. The objective is to destroy incoming warheads and score as many points as possible before the cities are destroyed at which point the game is over. The game is mouse controlled, moving the mouse targets the incoming rockets while the left & right buttons fire missiles from the left & right missile sites. It has five skill levels for slow computers it can be customised to use square blasts rather than the more computationally intensive round ones it supports multi-player hot-seat gaming where typically each player plays for five minutes before handing over to the next 'commander'. multiple backgrounds supplied with the game and more were available from the developer The shareware game was available for download from bulletin boards etc. It was fully functional but became non functional after several minutes.