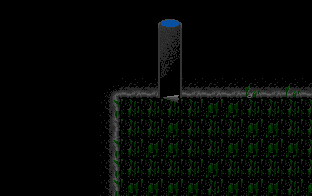 A lone inventor comes up with an elegant mini radio control and camera system. Desperate to beat his rival, he races his application to the patent office by folding it into a paper airplane, then augmenting that plane with his new control device. Over seven levels, the player braves dangers and rides wind currents -- through air vents, across fields, and between racing automobiles. As the game progresses the airplane exhibits new powers and abilities, including bombs, rocket boosters, and missiles. Several game elements are taken from the author's previous game, Rocket (to which Paper Airplane is the registration bonus), such that Paper Airplane can be seen as a spin-off of or semi-sequel to that game.