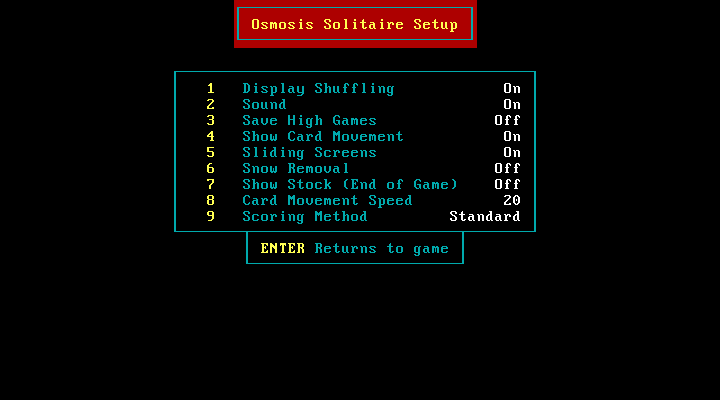 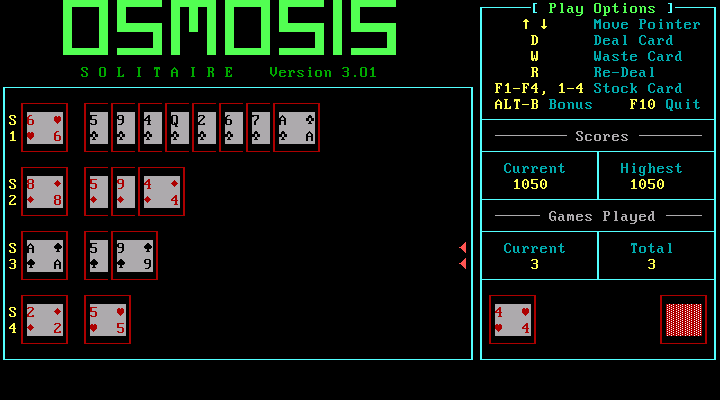 Osmosis, also known as 'Treasure Trove', is a Solitaire card game. The game uses a standard 52-card 4 suite deck, and the object of the game is to sort the cards into (unordered) suites. In order to do this, after shuffling the deck, 16 cards are first dealt into 4x4 face-down vertical 'spare stacks', then the top card on each is turned face-up. The next card from the deck (no 17), is then placed face up to the right of the the top spare stack, and declared a 'foundation base'. Any other card of the same suite may be placed in a row over the base card, disregarding numerical order for this first row. Below the first suit foundation row, the other suits are placed but now the cards have to follow in the same order as the suit immediately above. The remaining deck is used for picking cards 3 at a time into a 'waste' heap, and trying to place them on the foundation by taking cards from the top of the waste heap. When the remaining deck is run through, and all cards in the waste heap, it is not shuffled, only turned over and re-dealt in the same order. If no cards can be placed after the deck has been re-dealt, the game can be ended manually, as no cheating is allowed. The face-up cards in the spare stacks can also be placed on the foundation, allowing the next spare to be turned over. If a spare stack is emptied it is just left as is. The ideal end result is that all cards are in four rows of unordered suits on the foundation, but that depends on how the cards are dealt. Scoring is made from game specific rules, and the result is kept in a local high-score list. There is also a 'Grand Masters' high-score, based on registered users high scores from previous releases of the game.