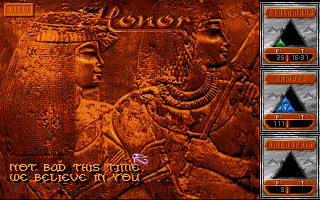 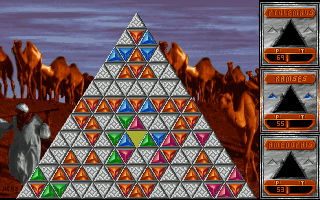 Osiris is a puzzle game for three participants. The game field is a pyramid which in itself is divided into triangle-shaped fields. Each player has a number of blocks in one corner with the goal to reach the middle of the pyramid, representing a treasure tomb. Each turn, a player can move one of the stones up to four fields. However, each stone has a limit of available moves and after that it becomes immobile. A stone can be removed from the field it is surrounded by two (or three if it is immobile) hostile stones. The winning condition is to get the most points. While removing enemy stones give points, the real deal is in the treasure tomb. When a player reaches it with a stone, he is out of the game while the others try to remove the stone in question. If it is still there after three rounds, many points are awarded. The game features both a multiplayer and a single-player mode. When playing alone, the player has to win 99 fields which increasing difficulty. This is not only reached by making the opponents stronger, but by adding obstacles onto the playing field like bombs or already immobile stones.