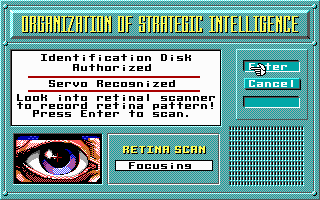 Omega casts the player into the role of a cyber-tank designer and programmer. The goal is to design a powerful tank capable of defeating opponents within the frames of a limited budget. A successful completion of this task grants the player character a higher security clearance and a large budget. Combat plays little to no role in the game; the gameplay is dedicated to designing the tanks themselves. The player programs tanks by using a built-in text editor. It is possible to assign different artificial intelligence script commands that control various aspects of the tank, as well as enable communication between several tanks in a group. The player must take into account the equipment of a tank and its attributes in order to design a vehicle that would prove successful in combat.