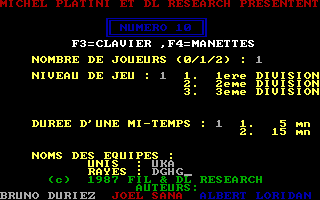 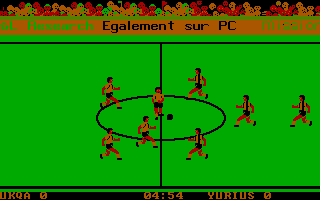 Numero 10 refers to the shirt number of French football star (and later UEFA president) Michel Platini who here gets his own football game. Except for Platini's name and picture on the title screen there are no real teams and players featured. The game features only single matches featuring one blue and one black team that can be named beforehand. A match can be played by one or two players and there is also a demonstration mode where the computer plays against itself. When playing alone keyboard controls are available but in two player mode joysticks are required for both players. Difficulty can be selected from first to third division. It's also possible to choose game length, either five or fifteen minutes per half. The game uses a side scrolling view similar to Commodore's International Soccer. In addition to the four movement buttons a single action button is used to play the game. This button is used for passing, shooting and tackling. When passing the ball will go to the nearest team mate while when shooting standing still will lead to a high shoot while doing so while running will lead to a lower shot. If not in possession of the ball the player closest to the ball is the one under control. When the ball is within six meters of goal it's possible to take control of the goalkeeper and the action button causes it to attempt a save.