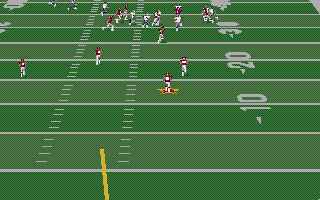 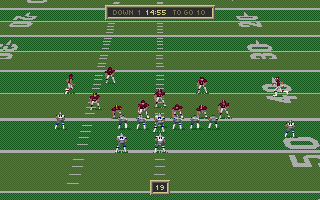 NFL Coaches Club Football is an American football simulation, the first in a short-lived series from MicroProse. The game features the teams and players of the 1993 NFL season, and has both single game and league modes. Also included are comprehensive team and playbook editors. Each of the 80 offensive and 80 defensive plays that come with the game can be modified by changing formations and positions as well as individual commands for each player. The plays can also be compiled into playbooks at will. In the team editor, team ratings, the player roster, the starting players, and even strategies for each coach are adjustable. Actual game play can be done in either Coach mode (only the plays are called) or Action mode (players are controlled as well). During playcalling the camera is set behind and above the line of scrimmage, but moves in accordance with the action, moving to different angles when there is a long pass or a field goal attempt, for example. The game allows the recording and playback of plays as files and features digitized speech for players and referees.