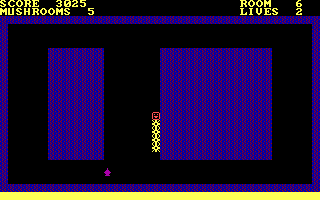 A Compute! Magazine type-in BASIC title featuring Nerm the Worm, who is trapped in Bemer Castle and would like nothing more than to escape (and consume a generous helping of "magic mushrooms" along the way). Yet another variation on Snake where the player controls a serpentine crawler in perpetual motion, which must be guided to consume food, dodge deadly walls, and avoid biting its own tail. The castle is composed of eleven rooms, each trickier to navigate than the last. In a vaguely Carrollian manner, the rooms are prone to sprouting mushrooms which cause Nerm to grow as he eats them: after consuming five mushrooms, the exit doors will open, leading to the next room. Extra lives are awarded along the way, presumably another effect of the magical fungi. When the game is over, a verbal ranking is given based on the player's progress, ranging from "zero" to "hall of fame".