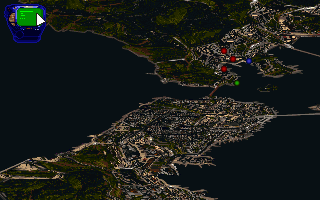 After a meteor crash causes the separation of California from the rest of the continent, major corporations of the future decide to invest in the decadent state. It's not long before the newly restored California calls for independence. And so is Calia created. The player controls Rick Cage, a good-guy hunter trying to continue the investigation his father left after being murdered. Conspiracies are all around in the rich but decadent state of Calia. The game begins after Senator McAllister, a close friend of Rick's father, is murdered in public. Rick seeks the truth and revenge, and must work his way up the conspiracies ladder by arresting hackers and drug suppliers in order to get to the major drug lords that corrupt Calia. NeoHunter plays like a cinematic-backdrop shooter similar to Virtua Squad series. It mixes some puzzle solving and light elements of resource managing (like gathering credits to get new weapons and equipment), and also allows the player to choose the next steps to take, making for a quasi-linear experience.