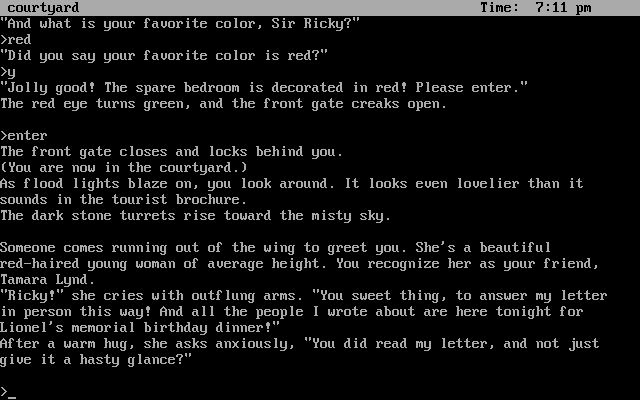 Tamara Lynd has recently become engaged to Jack Tresyllian, a wealthy owner of the Tresyllian Castle in Cornwall, England. Shortly afterwards, she began seeing a ghost-like figure, a mysterious White Lady, who has allegedly been haunting the castle for centuries. A series of events and dark suspicions involving hidden treasure convince Tamara that her life is in danger. She contacts a friend of hers, a young American detective, asking him to travel to the castle and investigate the mystery. Moonmist is a text adventure game. In the beginning the player chooses between four different scenarios, represented by the colors red, blue, yellow and green. Each scenario has different tasks, a different criminal, and different treasure. The game has a built-in clock, and must be completed before 6:00 am in-game time, otherwise it ends prematurely. Depending on the player's choice of the protagonist's gender, characters may react differently to his or her actions.