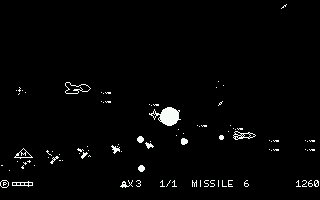 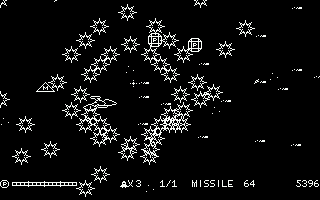 Mono Space is a scrolling shoot-'em-up that fuses the play style of Gradius with the wire-frame aesthetics of Asteroids, sending the player across the voids of space and through hordes of death dealing aliens, all presented in stark black-and-white. The action proceeds from left to the right, as in most horizontal shooters (with some degree of vertical scrolling possible); the player's ship is equipped with a forward-firing blaster and a special missile weapon. The entire game consists of a single level, broken down into stages by a series of checkpoints. Out of the various types of enemy craft, bizarre geometrical shapes and (yes) asteroids that patrol the star lanes, some will drop power-ups when destroyed: one kind adds to the player's missile stock, and the other increases the ship's power. Raising the power gauge beefs up the ship, multiplies its standard guns and adds to its armor. Written in QBasic, Mono Space uses a handful of strategically-placed assembly language routines to improve performance and overcome some of the interpreted language's limitations.