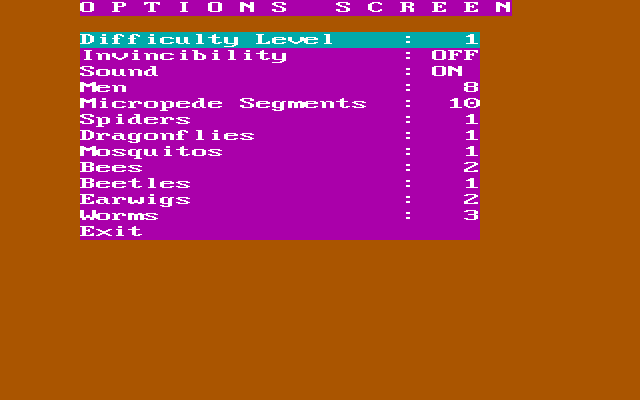 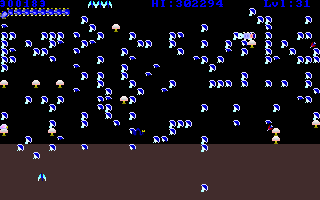 Micropede is a single player, mouse controlled, freeware, game based on Centipede. In this game, the player controls a spaceship, which can move freely in the bottom third of the screen, and shoots upward to destroy the oncoming micropede. The micropede is made up of many segments, and when a section is separated from the rest of the body, its foremost segment becomes a head, forming a new creature. Scattered around the playfield are mushrooms. If a segment gets trapped by mushrooms it will either eat the mushroom or it will suddenly zigzag down to the bottom of the screen. Sometimes a large column of segments will zigzag down to the bottom. Also wandering around the game area are these creatures: Spiders: The spider will enter from one of the sides and continues movement toward the opposite side exit point. All mushrooms touched by the spider die. Mosquitoes: The mosquito moves diagonally from the top and bounces off the sides of the screen. Besides getting points, if you kill a mosquito the field of mushrooms will retreat upwards and out of your domain by one row, clearing these mushrooms gives the player a clear field of fire and movement, it also prevents further mosquito attacks Bees: These move straight down the screen producing mushrooms at random along their path. Unlike all other enemies, which all take one shot to kill, the bee takes two shots. Dragonflys: If not killed these will fly off the bottom of the screen and in so doing they will cause the mushroom field to advance further down the screen into the player's area Beetles: These make mushrooms hard and invulnerable to the player's bullets. The only way to clear hardened mushrooms is to let a spider have them Worms: These do no harm and do not attack but points are scored for killing the poor things Earwigs: As with worms these creatures do no harm and do not attack but points are scored for killing the poor things. Worms and earwigs move in different patterns The game has a high score table, optional sound and an optional invulnerability mode. Extra ships are awarded every 50,000 points in version 1.04, it had been every 30,000 points in the first public release. every five levels there's a bonus round where the micropede does not attack but everything else does.