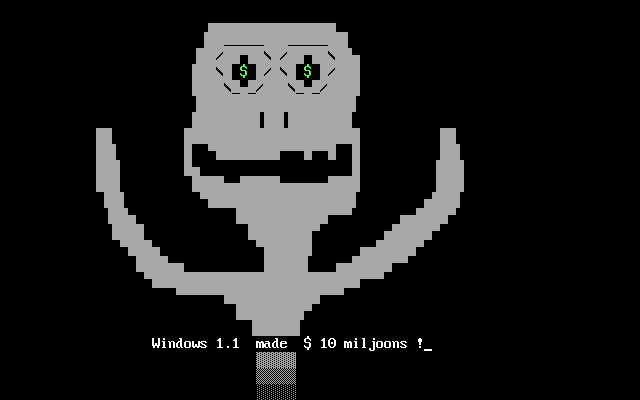 Have you ever wondered what a day in the life of Bill Gates is like? Some cynical Finnish programmers decided to cobble together this little program to illustrate the big business decisions coming across Mr. Gates' desk. Starting with a pile of cash, the player needs to decide how to allocate it, in one of three ways: First, he can hire bodyguards. These fellows won't help you make any money further on down the line (in truth, they are a continual drain on your accounts) but in the event of Redmond getting stormed by rabid anti-Microsoft fanatics, their bodies will keep yours from harm. Second, he can file a lawsuit -- most likely against an actual software innovator -- which is a bit of a crapshoot: money is allocated to the legal team and money comes out as a settlement, and if the player is lucky, the latter exceeds the former. Finally, if he's really desperate, he can develop and publish software. Choosing whether to make a minor (3.1 to 3.11) or major (2.0 to 3.0) update, he then assigns varying sums to the programming and marketing departments. Cross your fingers and see how it pans out in the marketplace! (Conspicuously, this game was never ported to Linux or released for Amigas or Macs 8)