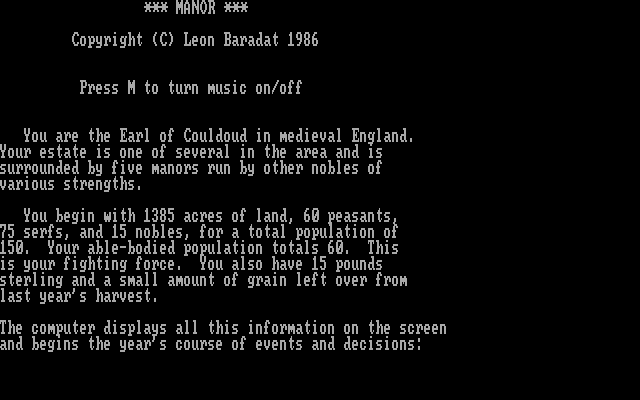 Manor is a land management-game, in the vein of Hamurabi / Kingdom / Dukedom. You are the Earl of a medieval English manor: each game turn represents one year of your reign, and your job is to run things wisely by means of managerial decisions. You have three classes of subjects: serfs, peasants and nobles. These make up your workforce and army, and must be assigned taxes, duties, lands and provisions; peasants and serfs grow crops, which go towards your revenue (along with taxes). The king, in turn, collects taxes from you. You'll have to keep the populace well-fed and happy - each class forms its own opinion of your rule, and low approval ratings may lead to revolts. Knighting peasants allows for some degree of social mobility. The Earldom is surrounded by five neighbors, some stronger, some weaker. Lands can be bought and sold in exchange for grain, and you may gain territories if you launch a successful attack; the other nobles may decide to do the same to you, so defense is also important. There are other things to watch out for, like keeping your soil fertile and avoiding starvation, rats, and even the occasional black plague outbreak. Even if your rule is a success, the game will eventually end as your character dies of old age. At the end of your reign, you are given a rating based on your effectiveness as a ruler and the prosperity of your estate.