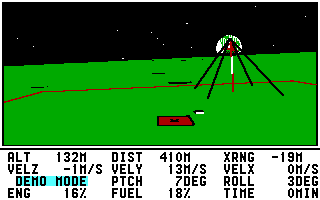 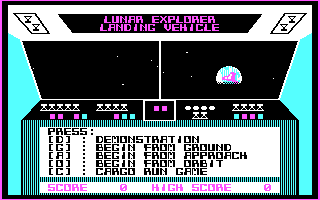 Lunar Explorer is a real-time 3D simulation of flight from lunar orbit to moon landing. Using either keyboard or joystick controls, the player must master the forces of gravity and inertial motion as he maneuvers a Lunar Landing Vehicle (LLV) over hazardous terrain. Flights can begin at the Tranquility Base landing pad, in close approach to the lunar base, or in orbit around the Moon. This LLV simulator exposes moon pilots to the dangers of inaccurate navigation, inefficient fuel consumption, and incorrect maneuvering. If fuel is consumed before the LLV reaches its destination, the craft will either crash into the lunar surface or orbit the Moon "forever." The cockpit window presents the lunar landscape from the pilot's perspective. Solid color 3-D graphics depict important environmental features such as lunar bases, refueling stations, craters, and constellations. The accompanying manual not only describes how to operate the game, but also describes in detail NASA's hypothetical plans for a space station and lunar mining facility. Another section describes the game's use in the classroom.