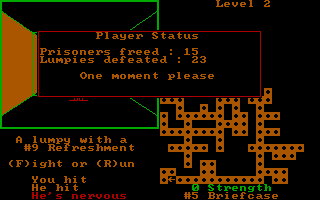 Cargo ships have been disappearing near the planet Lotis IV, home of the Lumpies: entire crews are missing, and this first-person dungeon crawler sends you to investigate. Unfortunately, your arrival takes the unexpected form of a crash landing, and you find yourself sneaking around the underground Lumpy habitat, unarmed and incommunicado. Your 3D view is complemented by an overhead map, which fills up as you progress. Your mission: locate and release the Lumpies' captives, and find the communications room to call for a ride home. The locals take issue with your intrusion, and every Lumpy you encounter will attempt to engage you in turn-based combat, using... well, anything it can get its greenish little hands on. Lumpies are famous for their combat prowess, and can visit grievous bodily harm on you whether they're swinging actual weapons, toys, or office supplies: on Lotis IV, an object's worth in battle is measured only by its "power rating", and a #1 Bomb or a #2 Gun are no match for a #6 Briefcase or a #7 Yo-yo. Defeat a Lumpy, and you get to keep its weapon. Keep in mind that weapons can be destroyed during a fight, at which point it is best to run away, and perhaps hunt down some food to replenish lost hit-points. The maze has two levels, but the original article in Compute! Magazine - where the BASIC code was published - explains how to add more by modifying the source.