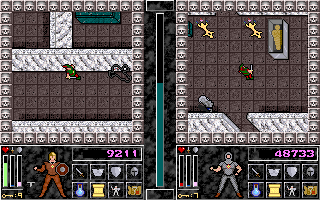 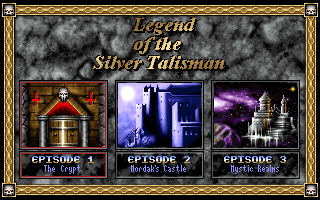 Long time ago, the people of Yoneda lived in peace protected by the magical Silver Talisman, created by the Council of the Grand Wizards. As the power-hungry mages split into the rivaling Council of Light and the League of Darkness, a war broke out, lasting many generations. Chaos was brought unto the land as the Talisman was stolen. Retrieve it from the clutches of evil to restore order. Legend of the Silver Talisman is an action game (with light RPG mechanics) inspired by coin-operated machine hit Gauntlet, with visuals similar to Ultima 6. Two players (the other character goes under computer control in single player mode) compete over items and power-ups to be found in enemy infested dungeon mazes: swords, wands, shields, helmets, armor, scrolls and potions. Combat is done by simply running into the creature/player. The first episode (out of 3) was released as shareware. From 2003 the full game is available as freeware.