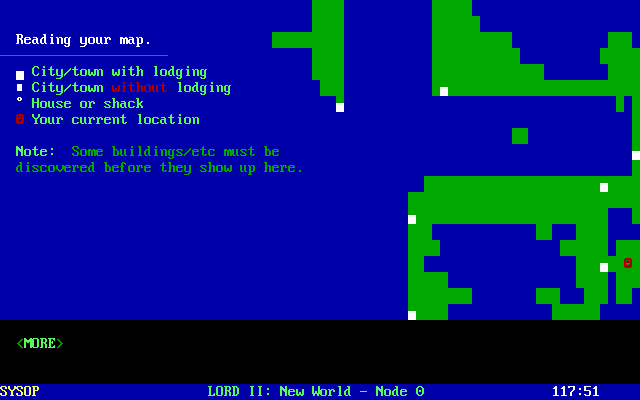 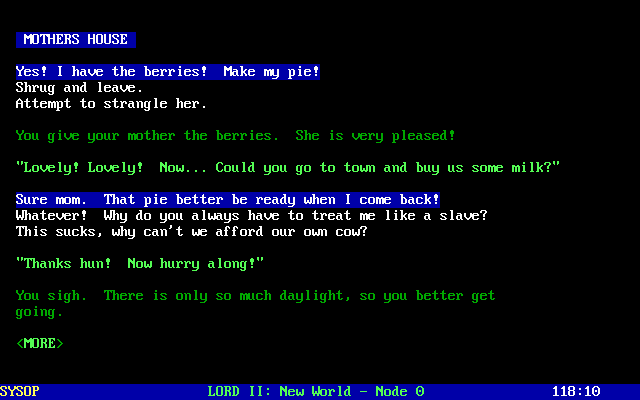 As a follow-up to Legend of the Red Dragon, a game that burst at its seams with derivative borrowing, no one was expecting such a radical departure in approach and style as they got in New World -- something akin to an unwholesome marriage of Ultima, ZZT and Habitat, a realtime multiplayer BBS door effectively amounting to a roguelike MUD with a huge sandbox for free play alone (even locally) or with all your friends. A massive world map permits movement between numerous cities and regions and involvement in their respective political intrigues (and outright military campaigns!) against each other; alternately, a player wishing to fish on the end of the dock or collect berries for Mom to bake into pie can happily play on that scale as long as they like. There's no shortage of quests (especially with the option to include user-contributed in-game modules) and no lack of opportunities to increase experience through the slaying of random encounters. On the other hand if you prefer you can just sit around the tavern or picnic blanket and chew the fat with your buddies, exchanging comments and trading curious items acquired in your journeys.