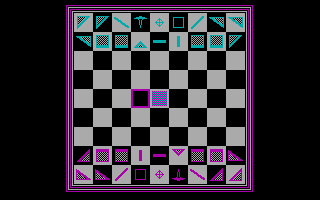 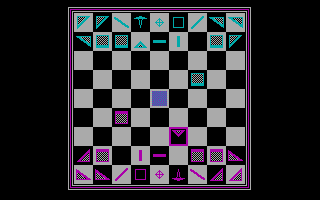 Laser Chess is a chess variant for two players. The goal is same as in traditional chess game - defeat the opponent's king. The gameplay is enhanced by laser weaponry, although the players may choose the standard way of playing. The player may manipulate (by moving and rotating) all the pieces. There are eight types of pieces with special abilities, such as splitting or absorbing the laser beam. Basically most of the pieces are covered with mirrors reflecting the laser beam. Laser piece fires a laser beam in a straight line into a mirror piece placed opposite. The laser beam reflected by the mirror moves forward until it hits another mirror (including opponent's one), wall (beam disappears), absorbing piece (beam disappears) or destructible piece (including own one). The king and the laser have no mirror protection, some of the other pieces are protected only on the selected sides and the diagonal piece can't be destroyed by a laser beam, because all of its surfaces are reflective. The loss of the king means the end the game, the loss of the laser - the necessity of playing chess in the traditional way.