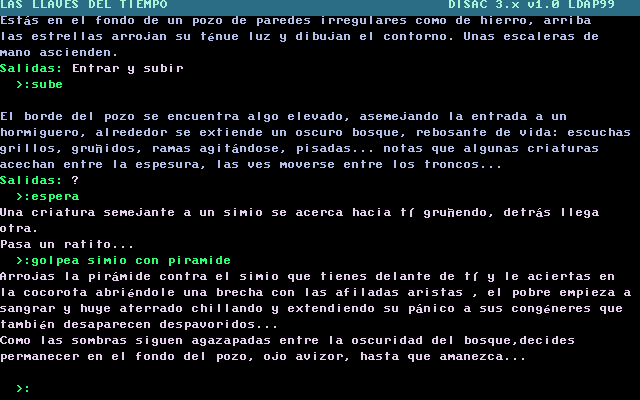 Las llaves del tiempo (Time Keys) is a freeware interactive fiction game made with DISAC engine. Five kinds of colored fonts, three stand-alone picture screens, and one stand-alone midi music file are included in the package available for download. The story starts with the conversation of mysterious persons about four prototypes and coded message received from outer space. Player takes a role of man, who is sitting on the toilet after yesterday party with his friends at the bar. Also this man remembers that he has found a precious pyramid on the street, and he thought that it should bring him a luck. The next actions are controlled with typing in the sentences in form VERB + NOUN to perform action. Pulling the chain to flush the toilet, the protagonist is sucked into whirlwind to be placed in complete darkness. Consequentially, he finds himself in another world full of mystery. It is player's goal to find out what is going on and how to return back. The game was made in Castilian Spanish.