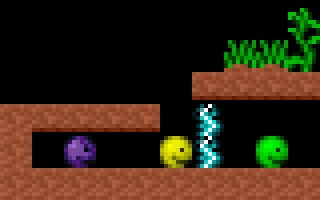 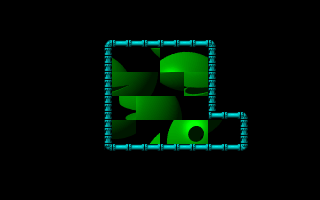 Joe is a puzzle platformer starring Joe, a jolly green blob stranded in a series of deviously-designed mazes. The only way out of this mess is by collecting enough keys to get through the doors barring the way to the exit. This would be simple, but Joe's movements and jumps are strictly confined to a grid: any misplaced step or hop can undo your progress, or (often enough) drop you to your death - the level design incorporates jumping puzzles requiring memorization and precision. Elements are introduced gradually as you go: deadly mines and water; switches, which move bricks around and operate lifts; slippery ice; teleporters; poison mushrooms that curb your jumping skills, until you can find a cure; and mine carts that can be pushed around. On some levels Joe is joined by his yellower twin Jasper, and the player can switch control between the two at will. On occasion, Jasper may appear all by himself. There's also a less-likable acquaintance, the purple blobbie Igor, who enjoys standing around and insta-zapping anyone else who enters his line-of-sight. When you quit the game you get a password that will return you to the last level played; there's also a level editor which lets you add to the repertoire of diabolical dungeons.