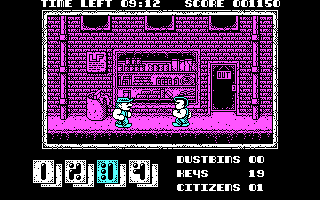 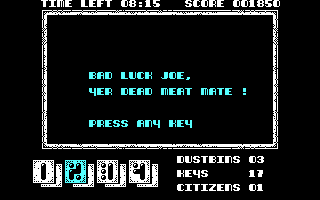 As Players Software correctly predicted, London in 1995 is an unfriendly unsafe city ran by thugs. Innocent civilians who leave the house will almost certainly face violence. An acclaimed hero since his successes in the original, Joe Blade is the man to put things right - if he can kill 100 thugs and rescue 20 civilians within ten minutes, the thugs will retreat and the city will be saved. As Joe, you must move through the streets and kill these thugs, by kicking them in the head (they have body armour). As in the first game, the streets are flick-screen and have many doorways linking them. Rescuing civilians involves touching them before completing a sub-game within a minute. There are four subgame variants of increasing difficulty, all based around a 1-2-3-4 sequence of numbers. The first involves simply stopping the cursor as each one appears in order - pressing the wrong one sends you back to having to find a 1. In the second, the numbers are on screen in random order, a cursor cycling through them - press fire to swap the two numbers currently highlighted. In the third, you are presented with two jumbled sets and must put one of them in order, by swapping numbers across the two sets. In the fourth, you must form the sequence by swapping an ever-changing number into the right place, by pressing fire at the right moment.