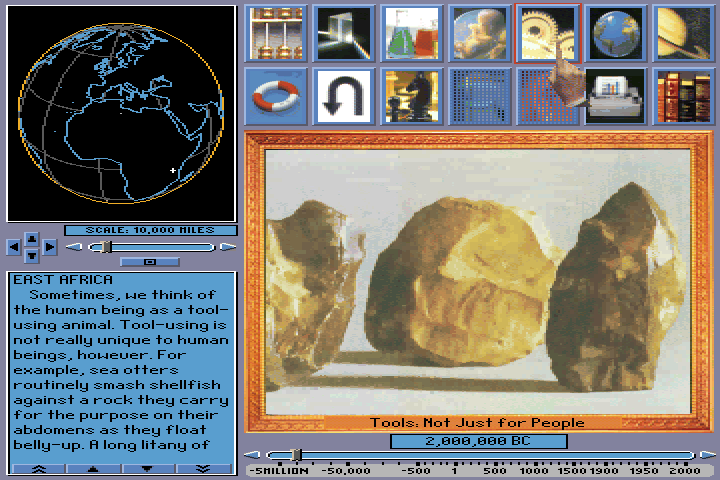 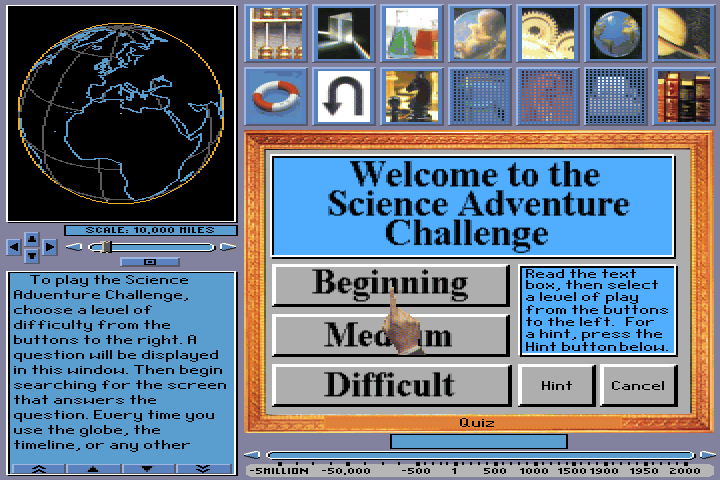 Isaac Asimov: Science Adventure is a single player, multimedia educational title which contains a science quiz - however it's not as straightforward as that.The first things to say about this product is that it is NOT an encyclopaedia and it is NOT structured - at least not in a conventional way, this product is a series of small articles that can be accessed in a variety of ways that are intended to pique the player's curiosity. The screen is divided into four areas; Upper Left: This starts with a picture of the Earth from the Moon but for most of the time it's an map of the world which the player can spin, zoom in/out of, and click on to get some information relevant to that location, it's even possible to zoom right out to view the solar system. Upper Right: Here there are fourteen boxes each with a picture, most represent a branch of science. For example the first picture is an abacus so that must be mathematics - well maths is in there but you'll also find Stonehenge and other stuff; the next picture shows light going through prism and this takes us to the physics; the flasks of coloured liquid bring up something related to chemistry; the baby represents medicine; the cogs and gears are machines, the earth is geography and the picture of Saturn is space. Below these icons are the controls. The lifebelt is the in-game help; the U Turn sign goes back to the previous screen, the books represent the in-game library and the chess pieces start the game - more on that later Lower Left/Right: When a new article is selected the text appears in a window in the lower left and the associated picture appears in the lower right. Beneath the picture is a date and a timeline allowing players can use the timeline to scroll through articles chronologically The Quiz: This is not the standard quiz format where the player is asked a question and they either enter the answer or they choose a response from a pick list. This is a 'Science Adventure' so when the player selects one of the three difficulty settings they get asked a question and the task is then to find an article that gives the answer. Sounds simple but it's not and this is not a flaw it's the essence of the title and is probably best explained by an example. One of the easy questions is "This planet is closest to the sun, can you find it?" So, up in the top right there's a map of the planet and the player zooms a long way and is rewarded with an image of the planets, selecting that will surely lead to the answer won't it? Well it doesn't, instead it leads to an article about LaPlace and his 1799 book on Celestial Mechanics. The next option our player tries is the in-game library where they find there's no entry under 'M for Mercury' or 'P for planets' however while looking the player wonders "Why is Tutankhamen's Tomb under the heading for pneumonia?" or "Why is there an entry for Balloon under August?" both of which lead to a quick detour to have a look to investigate before trying something else. All the time the player is looking for an answer the score keeps increasing and little bits of knowledge are being picked up and stored away. Eventually when an article that has the information is found the player gets an audible fanfare. The game has sound effects and can be played with the mouse or the keyboard.