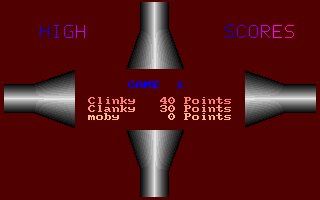 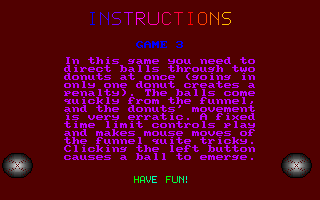 Icy Metal is a mouse-controlled game with three variants of capturing or throwing a ball through moving targets, somewhat like the children's toy ball-in-a-cup, except here there is no string attached to the ball. The author's intent is for the game to give a sensation of handling metallic objects. The objects used in the game are combinations of a metallic-looking ball, a torus and a funnel, with the additional difficulty of a magnetic force in one of the games. The games also have a time limit counting down, and the player can try as many times as wanted within the time limit. Each game keeps a separate high score list for the three best results. The first game lets you drop a ball past a moving magnetic torus bouncing from side to side, into a horizontally movable funnel, scoring a point. If the torus is near the falling ball, it will capture it magnetically, and you lose a point. The second game has two vertically moving funnels, which also can switch orientation, positioned on either side of the screen. A ball in the center can be thrown at either side, trying to hit a funnels large opening, which scores a point. Missing the funnel, or throwing into a funnel that is turned the wrong way, loses a point. The third game has two independent tori erratically moving in a horizontal level above a funnel containing the ball. The goal here is to throw the ball from the cup through both tori as they pass above the funnel. Success award one point, failure subtracts a point from your score.