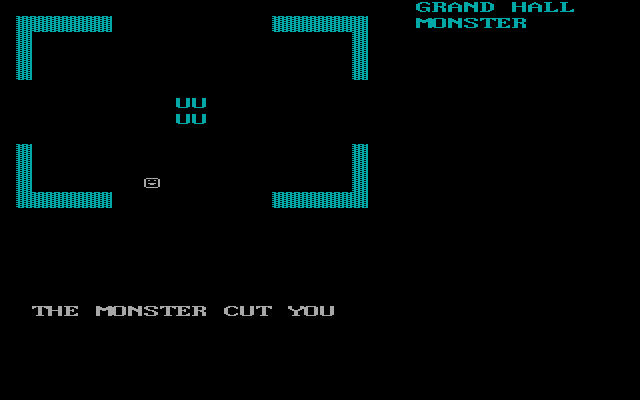 In its dark mansion the Hogbear awaits its next victim. Guarded by a Vampire, an Ogre, and various other creatures, the player will have to roam the many rooms of the estate and hope to escape with your life. Hopefully you can locate some weapons and use them in fighting these guarding monsters and ultimately Hogbear itself. Hogbear is an updated version of Castle Adventure wherein the game uses part graphic and part text commands to explore, loot and battle in order to escape from the castle. The game, though graphical, uses a lot of ASCII to visualize its graphics. The tone of the game is humorous but with a mean streak personified through the narrative which seems to have been written by the game's antagonist Hogbear himself. Combating the monsters involves moving into them with a selected weapon ranging from bladed weapons to dead chickens. This precursor to what is now labeled "survival horror" games has graphics (though marketed as an update of Castle Adventure, has little graphical difference from that game except for the use of colour) but needs text input for commands. Thankfully moving utilizes the cursor keys meaning the player can literally move themselves around the rooms and from room to room. In order to interact with objects such as picking them up you will need to be in close proximity.