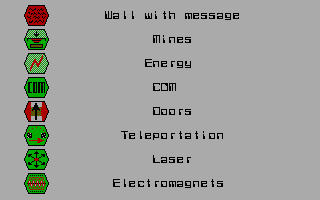 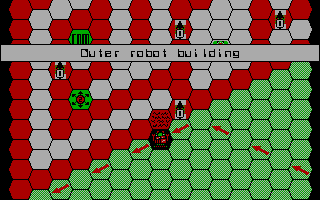 In a futuristic vision of the 21th century, mankind's most demanding and dangerous tasks are carried out by modular, adaptable robots called Hexsiders. But dependence has its pitfalls: a rebelling faction of robots has taken down the defense command center by sabotaging its main computer - deactivating every robot within, but keeping all the automatic security systems engaged. Outside the compound, only a small detachment of six Hexsiders remains. They must infiltrate the heart of the structure under radio control and repair the defective computer. Control can be freely transferred from robot to robot. The robots are far from humanoid - each Hexsider is a stack of hexagonal modules (up to 6), which can be added, removed or rearranged as needed. These modules determine the robot's functionality: the Central Unit module contains the robot's power source and data storage; a rollers module (placed at the bottom) allows for movement; other module types can be used to interface with other robots, or access the building's security network. New types will be found throughout the game, but your most precious module - the replacement unit for the main computer - is unique and irreplaceable. The maze-like environment is represented on a top-down hex grid map, though a rotating isometric 3D view can be used at any time. Doors and teleports are level-restricted: each robot has a level (starting at 1), which can be raised by interfacing with higher-level robots you encounter. A robot's level also restricts its access to the internal security network, which can be used to disable (or enable) lasers, mines and electro-magnets - strategically-placed defense systems that impede your progress and create intricate puzzles to be solved.