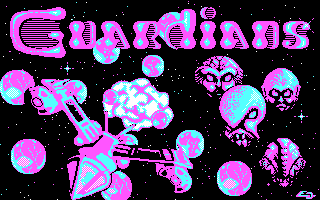 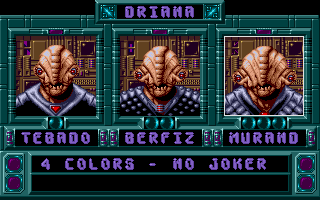 Guardians is a puzzle game in which the player takes the role of a guardian who is tasked with containing the so-called "Triffids", balls of pure energy. The game is played in a top-down perspective and has two plains. The upper plane is where the player is active and has to build walls. There are blocks of five colours which can be freely moved over the area. If multiple blocks of the same colour come together, they fuse together and are no longer mobile; those fusions are called "cohesions". Some blocks can be combined with any colour. The player can both use blocks which are already on the plain and place bricks from a reservoir. One to three triffids are on the lower plain and bounce up and down. If they bounce up and there is block hindering them, they are lost and give minus points. Regular blocks are destroyed when they come into contact; only cohesions are a permanent wall. The goal of each level is get a certain amount of points (by creating cohesions) within a time limit.