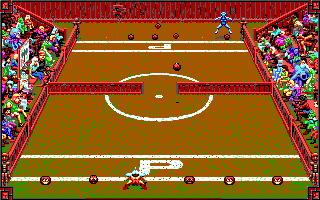 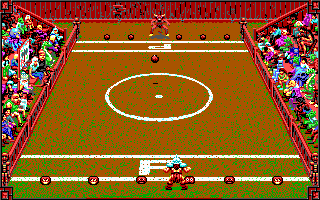 Every five years the various races inhabiting the fantasy world of GHoLD meet for the Grand Monster Slam tournament to discover which is supreme. You must win a total of 9 matches to prove yourself, with two sub-games to negotiate (Revenge of the Beloms and Faulton Feeding - fortunately these can be practiced from the main menu) as well. The basic game sees you and your opponent start with a row of six Beloms (small round creatures) which must be kicked across the pitch quickly enough to leave your opponent with all 12 at his end. When this happens you can run to his end to win. The main things to avoid during the match are being hit by a shot and kicking one into the crowd. When hit you lose time recovering, and are penalised with a Pelvan, which can cost you up to 3 Beloms, by hitting the crowd. After every third match you must play the Faulton Feeding game, which involves aiming at six progressively-higher poles to hit the Faulton creature with the food - fail to get enough of these and you must replay the previous match. After other games you play the Revenge of the Beloms game, in which Beloms hurtle towards you and must be deflected away with your pole - failure to clear enough before one hits you reduces your score from the previous match.