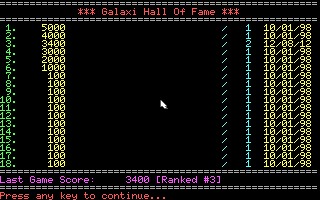 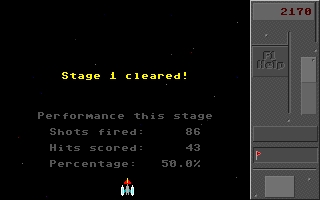 Galaxi is a shareware shoot 'em up arcade style game which is a homage to the classic game Galaxian. The object of the game is to achieve a high score. Gameplay is very much in the style of the old arcade games. The cursor keys move the player's ship from side to side while the Space bar fires the main weapon. The enemy ships, however, attack in the style of the enemies in Galaxian, swooping around the screen as they attack. When a wave of enemy ships has been cleared the player's stats are displayed and the next wave begins. The game maintains a high score table.