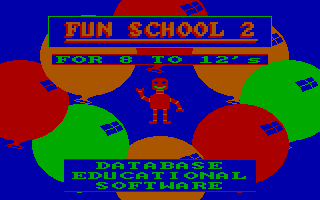 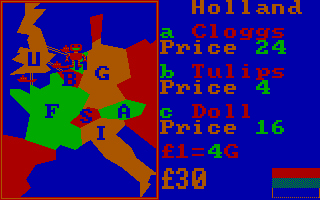 Fun School 2: For the Over-8s is an educational game part of the Fun School series with this version aimed at the over eights. Parents can choose a difficulty level for each game and also enter their own words to use. There are eight activities for a child to play and these consist of: Build a Bridge: A square sits underneath a bridge and it must be filled with various shapes and placed in the correct position to hold the bridge up. Passage of Guardians: The child controls a robot and moves him down various passages and attempt to get past the various guardians. When a guardian is touched, it reveals a word with the letters mixed up and the child has to type the correct word to move past.. Unicorn: A robot has to save an unicorn from a burning forest by moving three objects in front of it around a winding path. The robot can only carry one object at a time and certain objects cannot be left alone with each other while the robot is away.. Logic Doors: A robot needs to move around a maze of rooms with various coloured and striped doors by using the correct matching keys it finds. The robot can only carry two keys at a time so keys will need to be dropped in order to progress. Souvenirs: The robot needs to visit a certain amount of countries in Western Europe and needs to buy a souvenir in them as proof with just £30. After choosing a country on the map, three souvenirs appear each costing a different amount in the countries currency. A exchange rate is provided for each country. Code Boxes: A code appears on a box and you have to decipher it to guess how many objects are in the box. There are a various amount of boxes to try with the same code solution. Mystery Machine: The robot needs to operate the machine in the correct sequence but the instructions are in various codes. Once a code is worked out for each word the child enters the letters to receive the machine operating instructions. Escape: Completing each of the seven activities gives the child a keyword and these are needed for a robot to escape from another maze of rooms. Only certain doors can be entered and after progressing through a certain number, the computer will ask for a keyword. Give the computer all seven words and the robot has escaped.