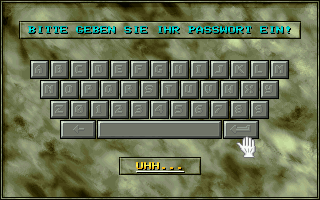 The Freaks are invading! These colorful blob-like aliens may look harmless enough, but like Tribbles with eyeballs, they're popping up everywhere - and multiplying fast. After much deliberation, the soon-to-be conquered people of Earth devise a cunning method to quell the alien surge: challenge the freakish little globs to a game of elimination... with the Freaks as pieces. Freak Out is a fast-paced strategy game where each level takes the player to a different location, to contain the attack of the fuzzy intruders. The playing field consists of interconnected cells, arranged in concentric squares. The Freaks (which come in four different colors) pop out of a hatch at the center, and can be moved about by rotating and smacking them, which sends them jumping to the next cell (if it isn't occupied). To score points and eliminate Freaks, three of the same color must be placed in adjacent cells, making them vanish in a puff of smoke. Speed is essential, since the quickly-reproducing aliens line up behind the hatch: if you let the queue get too long, it's game over. Random items and obstacles pop up occasionally, like bonus gems, freezing ice, stone walls, or colored circles (which can only be occupied by a Freak of the same hue). As the game advances, new challenges and mini-puzzles appear, which force the player to respond before more Freaks can be eliminated. A password records the player's progress after every level.