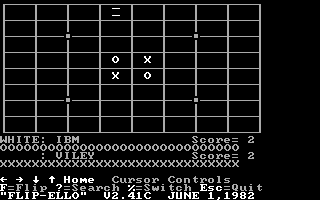 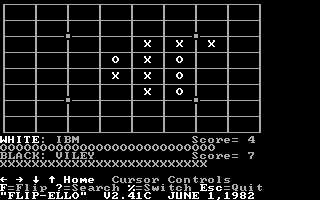 FLIP-ELLO is an early IBM PC conversion of Othello/Reversi, and as such it faithfully keeps to the established rules of the classic board game: each player chooses a color - black or white, represented here by "X"s and "O"s respectively. Initially two chips of each color are placed at the center of the 8x8 grid, then the players take turns placing additional chips, attempting to capture the opponent's chips and flipping them over to the player's color: this is done by enclosing a sequence (vertical, horizontal or diagonal) between two chips of one’s own color. When no more moves can be made, whoever has more chips on the board gets the game. In this adaptation, it is possible to ask for hints (whether any moves remain, or which of the possible moves is best); players may also switch sides in mid-game, as a potential extra challenge to whoever's currently in the lead. If any side runs out of pieces, one may be "borrowed" from the opponent. The game is playable against another human or against the computer, which tends to accompany its moves with gleeful taunts and jeers.