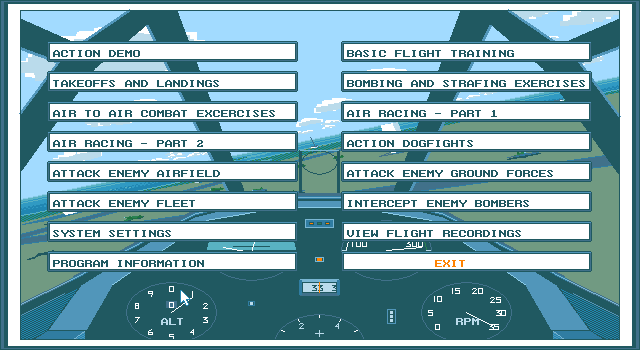 A shareware, WWII-themed flight simulator with combat that tries to capture the "spirit and feeling of real flight" while avoiding the complexities of other flight sims. The game, while having only one type of fighter-plane to pilot, offers the beginner several flight-training tutorials, regarding airplane controls, view control, take-off, landing, bomb runs and dogfighting. The main part of the 'Flight Action' are the individual scenarios that, very unpretentiously, drop you right into the action of attacking ground forces, naval fleets or convoys, fighting enemy bombers, participating in air-races where you have to guide your plane through gates in low-level flight, or rounds of 'survival-style' dogfighting. The game also allows the player to record his actions, view demos and review his own recordings from the main menu. In-game, the program offers a range of additional instructions regarding flight-basics, the cockpit controls and, uniquely, a guide to stereo-vision by means of either mock-up 'glasses' that separate your vision, or by using a reflecting stereoscope. Both methods rely on the game's option to split the screen to allow for said stereovision effect. Graphics are very simple, since the game offers no textures, but flat-shaded polygonal model of planes, ships, buildings, trucks with different colored, animated flat 'particels' making up the explosions. The airplane's cockpit is fully modelled, allowing for 360° view and mouse interaction. There is digital sound of engines and 'takatakataka' machine-guns and bombs.