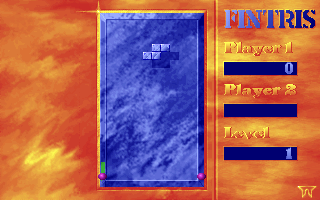 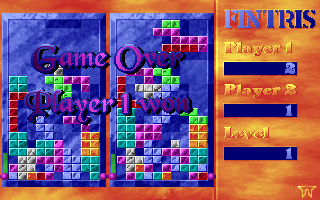 Fintris is a shareware Tetris based game from Finland. This implementation is entirely keyboard controlled. It has three game modes, a usual single player mode, a simultaneous mode where two players play side by side, and a duel mode where players compete over a number of games to outscore each other with the same blocks. There's an additional, optional, refinement called 'mana' which is described as "a sort of energy that you can use to activate cannons and manipulate the block queue". Mana is accumulated during game play and by clearing lines, it allows the player to zap awkward lines with the cannon and to use the 'Remove Block' and 'Duplicate Block' options. In addition the game can be played with standard blocks, or with two extended block sets, has a high score table and music. The shareware game is fully playable but displays annoying in-game messages ranging from random quotations to reminders to register. The registered version has mouse and sound blaster support, custom game configurations so the player does not have to re-select their preferred options again, and the in-game messages disappear. The game plays in Finnish, English or German.