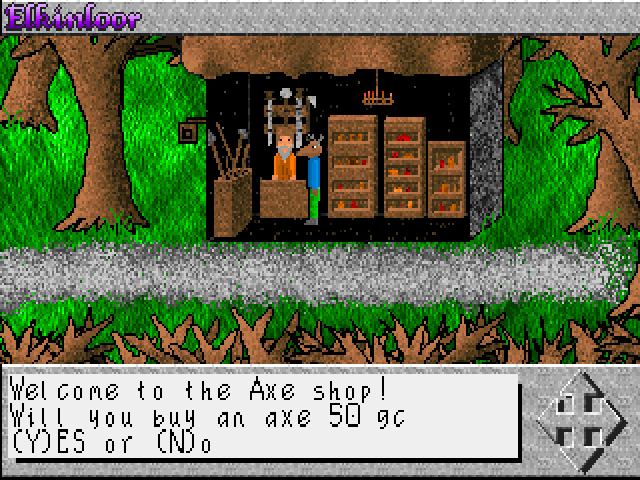 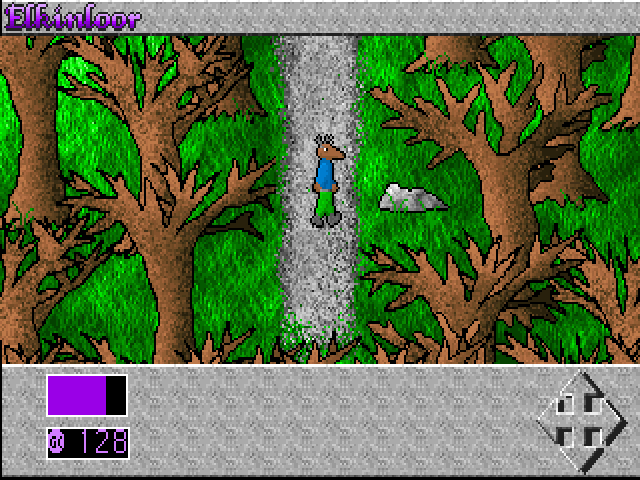 Elkinloor is the name of the main character in an adventure/action game set in a land called 'Vol Terra' / 'Vor Terra' in which the player takes the role of an half-man/half elk-like creature living in a forest with others of his kind. Storyline: Trouble has brewed between the Elkin tribes and their enemies Humans outside the forest, though an uneasy truce has been kept, until suddenly the Forest Princess has disappeared, and the Elkins now believe she was kidnapped by the Humans. The unrest is now rising, and if you cannot find the Princess in time, war will break out between Human and Elkin tribes. You play this game as a graphical adventure with predefined commands accessed through keyboard/letter menus. The player is moving through a forest environment, following a path through what amounts to a large maze, battling all kind of creatures met on the path, while gaining money in the process There are a few teleporting locations, looking like stone circle 'henges', where you can quickly move from one area of the forest to another by inscribing runes. There is no map screen, but you need to manually map the forest paths not to get lost, since all the backgrounds are repeated. There is a day/night cycle, time seems to advance as you move from one screen to another, and night time results in some types of enemies becoming more frequent, especially ghouls, who can give the player character a disease that needs to be cured. Friendly/neutral human characters are inside houses, and may give good advice, or ask the player to leave, regardless of which the player may loot the house of it's valuables, like money, medical kits and arrows. Houses and shops are spread out through the forest, and accessed on individual screens The player character starts out with a dagger, which is he default weapon after loading a saved game. Other weapons and protective armor may be bought in stores, provided the player has enough money accumulated from his battles or looting. As the player talks to the inhabitants of the forest, hints to the location of the Forest Princess is given, and some keys have to be located to gain access to the place she is kept.