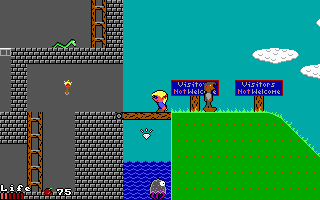 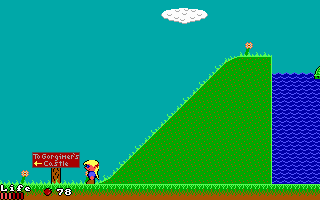 In the two volumes of Elfland you play as an Elf fighting off the evil trolls that have invaded your homeland. In volume one make the perilous journey to Gorgimer's Castle to get a potion that will help against the trolls. Gorgimer the Alchemist isn't friendly to strangers so you must find a way to convince him to help the Elves. In volume two you will continue the adventure as you rescue the village elves by defeating the Troll Chieftain. At the start of the game, choose to play as a boy or girl (Elfie or Elfita). Gameplay consists largely of platform jumping while avoiding enemies. You can jump up into trees, across clouds, and down into darkened caverns. An assortment of enemies will attack and block your way, but it is possible to temporarily stun them by throwing flash berries. The game is over when your life meter reaches zero. The adventuring aspect of this game consists of talking to other characters that reveal tips and plot developments. Every friendly NPC has something to say. The game starts in the safety of the Elf village, so talk to everyone. While exploring Elfland you'll find flash berries, gems, cherries, and other bonus items. In this game elves can't swim, so be careful around water, usually a turtle will help out. Plenty of secret things are waiting to be found so look up in the clouds. Finally, the game features a handy save and reload system. The game is divided into two major chapters, the first of which can be freely downloaded. Elfland was inspired by Captain Comic and ID's Commander Keen series.