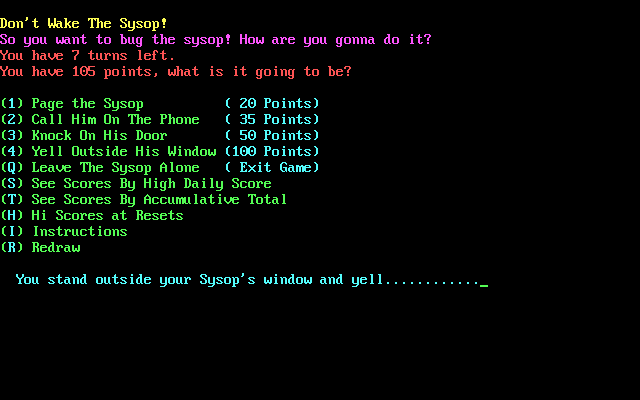 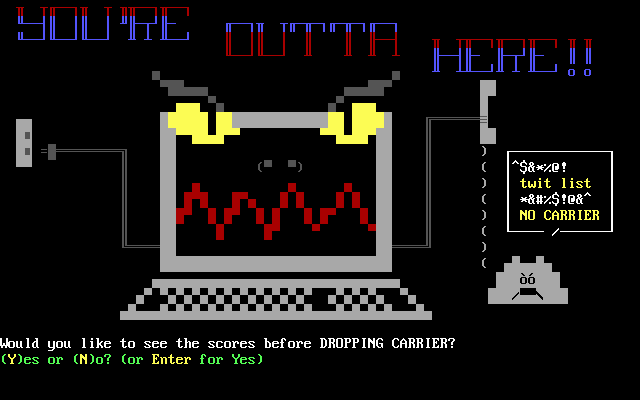 This BBS door game has a misleading name: rather, it should be called "See how much you can get away with bugging the SysOp before he wakes up", the SysOp being (for those of you who weren't online at the time) the system operator of a bulletin board service the player remotely dials in to. Often the BBS computer would be running in the SysOp's bedroom, and frequently users would pester the SysOp with the oft-abused (P)age SysOp menu command, which would make his computer beep and chirp to get his attention. What's the emergency? What? You're bored? You want me to install better door games? Well, ok. This is a game played from a BBS's log-off menu, when the user is already on their way offline, and simulates varying levels of harassing a hypothetical and simulated SysOp, for points, with the dire consequence of being kicked offline should the virtual SysOp actually roll over in their simulated slumber and be disturbed. A low-key cyber-Russian Roulette, if you will. Higher-point harassment (choosing the option to call the SysOp's voice line, for instance, or hollering outside their window) bears with it a greater chance of failure and disconnection. High scores are noted, and players can compete among themselves on a call to call basis to see who stays on top.