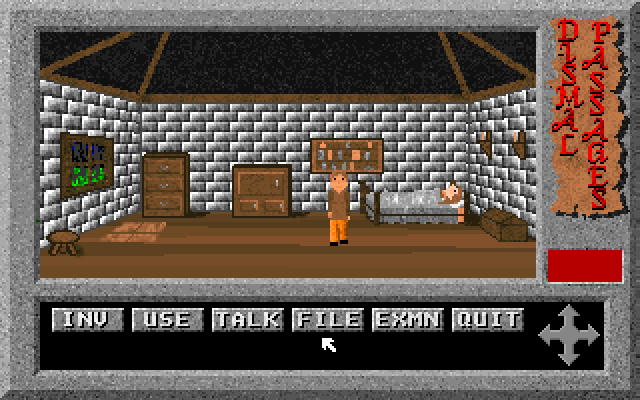 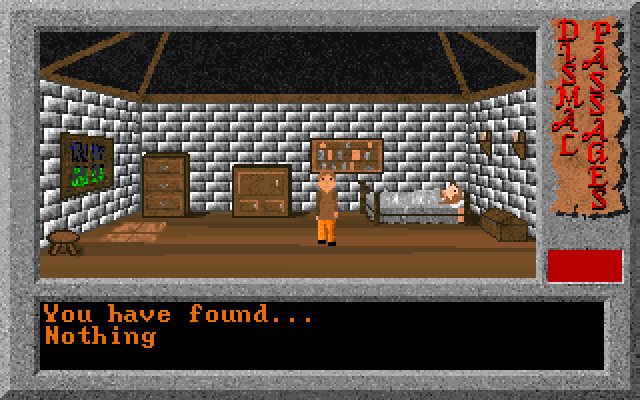 This 1995 version of Dismal Passages is a remake of the original Dismal Passages from 1992. The remake changes both the background story and location name from the original, and also the controls and gameplay is changed from a turn-based rpg into a more action-oriented adventure game, with graphics similar to the later 1996 game The Darkest Night The game now has more complex music and sound for action events and general ambience, and has an optional mouse interface, though the control implementation is not quite optimal, and you still can use the keyboard controls, if you wish. This a game with action elements, where the computer speed affects the gameplay, with randomly occurring battles that needs quick reactions to survive. Mapping is essential, since the game area is a maze of repeating and very similar looking forest paths. You have one save-game slot, which can only be used outside buildings. The updated background story now has a setting in the land of 'Vor Terra' (also used in several other games by the same author), where an unspeakable evil has taken hold of the land. You play a young man called 'Brael', married to a girl named 'Trenna', the both of you living as farmers, planting and harvesting as usual, when one day you got angry at a bird picking your newly sown seeds, and threw a stone at it. The bird transformed into an evil witch who cursed you and your family before disappearing, and the day after all your crops have failed, your animal are taken sick, requiring you to put them down. Coming back into your house, you find your wife in a fever, and none of your neighbors can offer help against the curse. You start your game in your house, with your wife lying in bed, unconscious and suffering from the fever. Now your task is to wander out searching for a remedy for your wife's illness, find the witch and either be forgiven by - or get revenge against - the one who cursed your family and farm. Some items you may need on your way can be found in the house, but you have to search for them. Outside you will meet monsters and wild beasts, and you will have to travel far on the maze-like paths winding through the woods surrounding your house. Registering the game gets you the second part called: DISMAL PASSAGES Part II: The Horrible Wraith