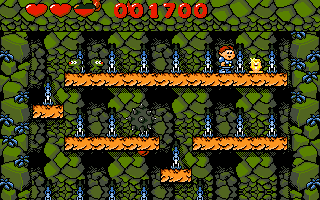 Released in North America this game is almost the same as Huckleberry Hound in Hollywood Capers released in Europe, but with a different character. Now it is a small boy, Dino Jnr. He needs to complete 5 stages in each of the 4 worlds (Under World, Sea World, Canyon World, and Sky World). There is no save/load or password access, so this should be performed during single gameplay session. The goal is to clear each level of gems (increasing your score), hearts (increasing your life energy), and golden statuette (increasing your score also) jumping from the bottom of the level to its top and/or vice versa. Different obstacles such as lethal drops, flying balls, bubbles, rolling rocks, spitting fire, inhabitants of the four worlds, etc. are present, and your jumping skill allows you to avoid them. If you lose your current energy as a heart, you'll be regenerated at the same place with another heart. There are three hearts to exhaust until game over. There are three attempts to continue the game after it is over, but all the scores will be cleared on each attempt. The highest score is stored. After completing the game once you may replay it again, but the gameplay will be harder. Bonus levels are also available after completing the world stages.