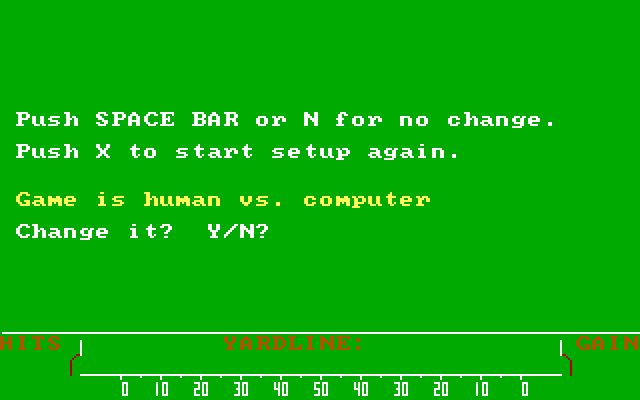 Defense is a game of American football that can be played by two or four players, or by one player vs the computer. It was released as shareware. The game's documentation says that it aims to be realistic as opposed to pretty with the player controlling the disposition of players, the plays and making the tackles. There are also options for defensive and offensive formations which can be player selected or the computer can choose between them automatically. Defense is always played left to right across the screen with the computer's team always being on the left. The game can be controlled via keyboard, mouse, joystick(s) and combinations of these devices depending on the number of people playing. The field of play is viewed top-down and is divided into zones, such as the rush zone, the line zone, the linebacker zone and the safety zone, into which players are placed. As a ball carrier attempts to run the length of the field they pass through these zones and the player instructs their player(s) to tackle / stop them via designated HIT keys. There is a comprehensive instruction document in Word format that accompanies the game. It deals with game tactics such as rushing, defensive signal calling, moving players, blocking and more.