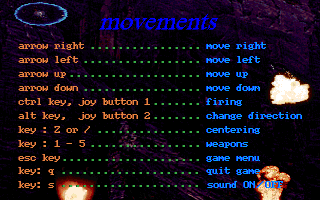 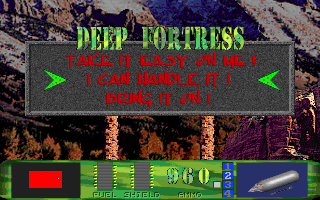 Deep Fortress is a shareware side-scrolling shooter. The player controls a helicopter and must fight through heavy defences of a fortress to rescue captured high command officials who are held inside. The player's helicopter has several powerful weapons, including a machine gun and several types of missiles. All weapons share the same ammo pool, with each weapon requiring a certain amount of ammo per shot. Ammunition can be replenished by picking powerups scattered through the level. Armour is repaired in the same fashion. There are seven levels in the game, with only the first level available in the shareware version. In each level, the player's mission is to storm one of the fortress' bunkers and destroy the shield generator, gaining access to the next bunker. Opposing forces include enemy helicopters, ground vehicles and troops.