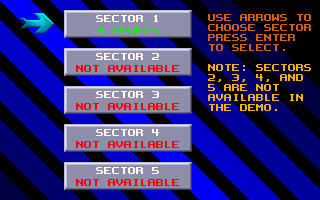 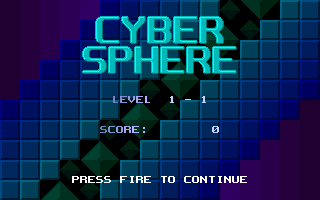 Cybersphere is an arcade game that is fundamentally similar to Breakout and Arkanoid. The player controls a "paddle" that can move horizontally which is used to direct a bouncing ball to destroy "bricks" arranged in different patterns. Some bricks may take several hits to destroy, and often drop gems that add to the player's score if collected, or various power-ups, including a temporary floor that will prevent the ball from falling outside the playing field, an extra ball, a wider paddle or cannons that the player may use to destroy more bricks. The game does not feature any kind of plot. The levels are broken down into several "sectors", with only the first one available in the demo version. In addition to regular levels, there are bonus stages that may be accessed by picking a certain bonus item during play.