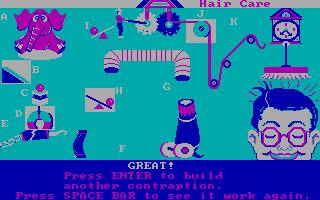 Similar in concept to the later (and better known) Incredible Machine series, Creative Contraptions is all about creating silly machines from wacky parts to accomplish even wackier tasks. The puzzles consist of Rube Goldberg contraptions with wrong or missing parts, and the player must figure out the correct replacements - from basic devices such as pulleys and ramps to absurd objects like elephants, cannons and boxing gloves. Three game modes are available: in the first, you pick a goal for your contraption, and your job is to fill in the basic mechanisms; the second puts you in charge of the "Zany Objects". The real challenge lies in third mode (Contraption Mix-Up), which takes you through a sequence of puzzles, complete with a time limit and a scoring system - the fewer mistakes you make, the more points you earn. Each sub-game can be played in two difficulty levels, and there's also a tutorial which explains (and demonstrates) how the basic mechanisms work.