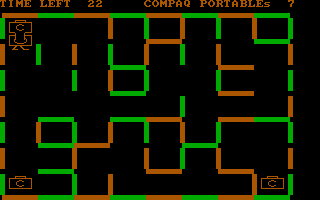 Unlike IBM's PC-DOS, most OEM-branded MS-DOS versions did not include BASIC sample programs (entertaining or otherwise). An early exception was Compaq-DOS - the edition licensed for Compaq's Portable/Plus/DeskPro series of PC compatibles. This one sported its own demo suite, including Time to Play, a collection of games (plus the non-game Biorhythms program). By version 3.31 this was phased out, but the first few releases each offered a different lineup: v1.x: Cat and Mouse, Geography Challenge, Biorhythms v2.x: Compaq Portable, Geography Challenge, Biorhythms v3.x: Compaq Portable, USA Geography Challenge, European Geography Challenge, Biorhythms Cat and Mouse: as the titular feline, your job in this action game is to catch up with the little mice that run around the playfield, and capture them with a keypress before they can get to the edge of the screen (you see, the edge is made of cheese). The mice make their attempts one at a time, and after 10 of them you're graded for your efforts. Compaq Portable: v2.x replaces the rodents with a more motivational prize – actual Compaq machines! The PCs appear randomly in the corners of an ever-changing maze, and you (as a Compaq enthusiast, of course) must navigate the shifting walls and pick up as many as you can in 60 seconds. Geography Challenge: this tests your savvy with maps, by flashing the location of a US state capital and asking you to name both the state (or its abbreviation) and the capital; at the end of the quiz it lets you know how well you've done. For v3.x this US-centric version was retitled USA Geography Challenge, and joined by a European counterpart, which does the same with countries across the pond.