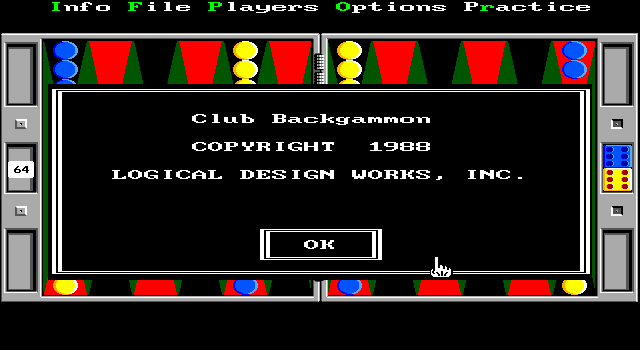 Club Backgammon is a computer adaptation of the board game that can be played by two human players or by one human against three levels of AI. It's also possible to watch a game between two AI controlled players. The game follows the rules of the original board game and is played with a cursor that is used to click on the board to move around pieces and to throw the dices. Some additional options exist to customize the game such as editing the colors of board, pieces and dices as well as lowering the speed. It is also possible to turn on manual roll which means the player is allowed to enter his own dice values. Another feature is the possibility to see an evaluation of a player's position. This shows the number of points each player is away from bearing off, an evaluation of the blots that a player has showing and the number of moves the other player can make. A practice menu allows the player to edit the game board by moving the pieces into any legal position. There is also an option to reverse sides which means the player swaps pieces with the AI opponent.